The store itself was unique, because it had once been a theater. It had local presentations as well as movies. The stage is still evident as well as the projection and lighting area. On the right as you entered was a glass counter and the cash register. Bulk kerosene, paint thinner and turpentine were at the rear of the store in huge drums. When a restaurant (the Rock Cafe) was added next door one of the exit doors was blocked. Another exit door opened to an outside area where pipe cutting was done. The floor was wooden and was oiled frequently. The combination of these odors with the traditional dampness of Morro created a wonderful essence that I never experienced again.

Rudy Tanner and Hearl Watts were the owners. Lum and Abner were their sobriquets. These names were conferred by Harold Callahan, the shoe store owner two doors down the street. Which title was ascribed to which man I'm uncertain. Callahan (who didn't have a nickname) called my dad Wong, because he had several Chinese cooks in his restaurant during and after the war. (We actuallly did have a great cook named Wong. He was from San Francisco. As well as being a cook he was also a herbalist who successfully treated our little dog when she got hit by a car). My dad was pretty adept at ascribing nicknames himself. Two women, possibly sisters, lived near the waterfront for a time. Each had a weak muscle controlling one eye. The left eye of one of them rolled to the left and the right eye of the other rolled to the right. Wong called them Port and Starboard--not acceptable humor nowadays, but pretty funny at the time. It should be mentioned that at this time you could get a huge abalone steak dinner for $1.35. Of course, this included coffee and desert. Callahan always had a twinkle in his eye and a ready smile. He enjoyed life and was able to see humor in just about anything. He loved Cadillacs and you knew he was in the store when you saw that chrome and blue 1947 parked nearby. 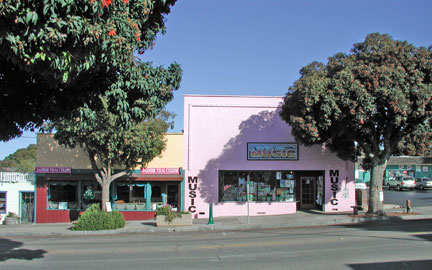 photos of Callahan,Wong, Lum and Abner

Parking was not particularly at a premium in those days, but in a small town you expected to park almost in front of the place you intended to shop. My sister and I used to park in front of Lum and Abners hardware store instead of our parents restaurant, the Rock Cafe. Naturally we wouldn't use the spot intended for our customers. This seemingly innocent act caused Lum and Abner some enmity, but we didn't mind--the remarks were testy, but we were young and not particularly attentive to their displeasure. In this present day photo, the antique place was Morro Bay Hardware and the candy store was the Rock Cafe.

About this time San Luis decided to pick up some revenue by installing parking meters. As much as everyone hated going to San Luis, this was just one more reason to stay away. Complaints echoed for months about the meters. Morro Bay was getting very busy with all the students attending Cal Poly under the GI Bill and parking downtown was getting difficult. Almost every time my sister or I parked in our favorite spot we would hear from Lum and Abner. 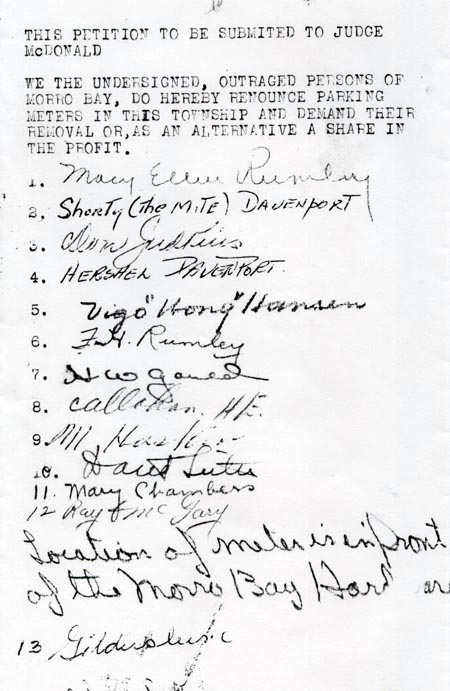 Their remarks were becoming acerbic and we finallly started paying attention. My Brother-in-law and I decided to do something about this so we made a parking meter. We placed a cigar box on a stick and wrapped it in butcher paper. It had a slot on the top for a dime, and a sign identifying it as belonging to the hardware store. We put it up early one morning before the hardware store opened. Naturally they spotted it at once, but left it and went on about their business.

As the stores began to open, word circulated that Lum and Abner had a parking meter. The news spread rapidly and there was great indignation about this matter--until they saw the meter. Sometime that morining a petiition was placed on the meter by local citizens who demanded that the abomination be removed. Many of the locals signed it and a copy appears nearby. The people I remember who signed it were, Tad and Ellen Rumley of Rumley's Department Store, Shorty and Hershel Davenport of Morro Bay Grocery, and David Leiter of Leiter's Drug store.

The Rumley's moved to Morro Bay from Tulare in 1940. Shorty and Hershel Davenport were from Las Cruces, New Mexico. David Leiter, our local pharmacist who also occasionally treated us for scrapes and bruises, was originally from Los Angeles.

Our parking meter provided those on Fifth Street with some fun and conversation. Lum and Abner had as much fun as the rest of us. After this episode my sister and I only parked there in emergencies.