In 1941 the country was still in a deep depression and up to thirty-percent of the population were unemployed. (See "Depression in San Luis Obispo, County 1930's" in index section.) Wages were two to three dollars a day if a job could be found. There were about one hundred thirty million people in the U.S., concentrated mostly in the East. Morro Bay (and California for that matter) were relatively undiscovered until the war. Fishing, farming and the abalone industry, plus a few jobs at Standard Oil, were the employers of the area. Jobs soon became plentiful. High paying jobs, unusual during the continuing depression, were available at the army camps and Morro Bay. In Morro Bay the rebuilding of the harbor and breakwater was in progress. Some jobs were dangerous and lives were lost on these projects. See James Smiley et al

The early years of the war were the wettest I remember. The flat area north of town was completely under water to Atascadero Road. (ed.note: Starting November 1940 through May of 1941 there was an average of eight inches per month, giving the area fifty-six inches of rain... personal communication from Pat Nagano.) Domenghini flat (located just east of town at the Los Osos turnoff) was inundated as was the highway. Old timers referred to this area as la cienega--an Indian or Spanish word meaning swamp. Some of the old highway still has some usage and can be seen adjacent to the trailer park. The town was isolated for days at a time. Road construction by Camp San Luis Obispo was in progress and the Camp was being enlarged. The military swallowed surrounding farms. Morro Bay became an amphibious training center. 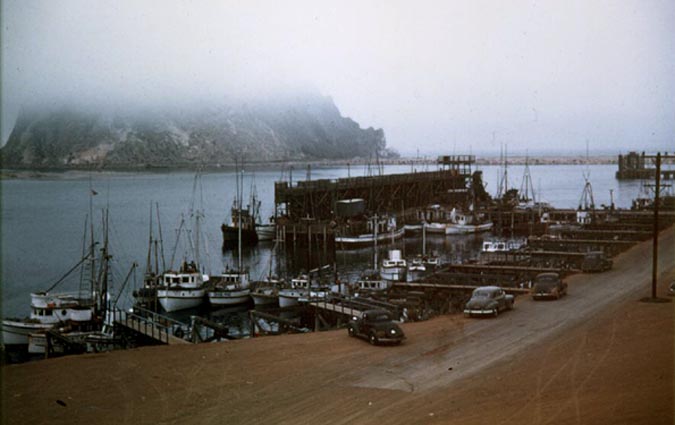 A trestle was built across the bay. Some remnants are still visible. The army brought battalions to embark from two staging areas. These can be seen in the photo to the right taken in 1947. They climbed down rope ladders to landing craft, which took them out to sea. They landed along the peninsula south of Hazard Beach and were brought back across the bay via the trestle. On weekends soldiers dotted the highways catching rides for an afternoon or night out. Military caravans slowed traffic to a crawl in the Paso Robles area. Highway 101 was still two lanes.

The war effort was intensive and unmatched in patriotism and dedication to win. If one had an extra room it was very unpatriotic not to rent it. Morro Bay opened its homes to strangers as there wasn't room for all the construction people and others that served the military. We saved the foil from cigarette packages. We bought savings stamps and bonds. If you were lucky enough to own some high powered binoculars, you were required to turn them in for the duration. Believe it or not, they were returned after the war. See War Posters There wasn't any film to buy. You certainly didn't want to get caught taking pictures near a military base. This is why there are no pictures of our amphibious training center. (I have seen one that was a government release) Gasoline was very inexpensive and it couldn't be bought without ration stamps. At some time toward the end of the war, a friend and I mixed blazo (for camp stoves) and diesel just to take a ride to San Luis. It was very poor fuel for an auto, as it was powerless and it also engulfed the car in smoke. There were stamps for everything--sugar, meat, shoes, canned goods--you name it--it was rationed. See Sugar Rationing Everyone had a common purpose and seemingly no one was exempt. Even some movie people were stationed here. Van Heflin was at Camp San Luis and Red Skelton was stationed at Camp Roberts. Mr. Skelton visited Morro Bay on several occasions. I remember someone asking him if he was Mr. Skeleton! (See Camp Roberts Museum near the end of the index page.) The military brought thousands of men to the central coast. Some brought their wives. One of these wives was of unusual beauty. When her husband went overseas, she remained in town. She became a cashier at Ford's Pool Hall. We only knew her as Rusty, a name that described her dark red hair. My friends and I were about fourteen or fifteen and had never seen anyone quite like her. When she walked everythng seemed in motion. This must have been the era of leg make-up. Silk was unobtainable and there wasn't enough nylon for both parachutes and stockings. We spent as much time (and money) as we could afford playing the pinball machines just so we could watch her. 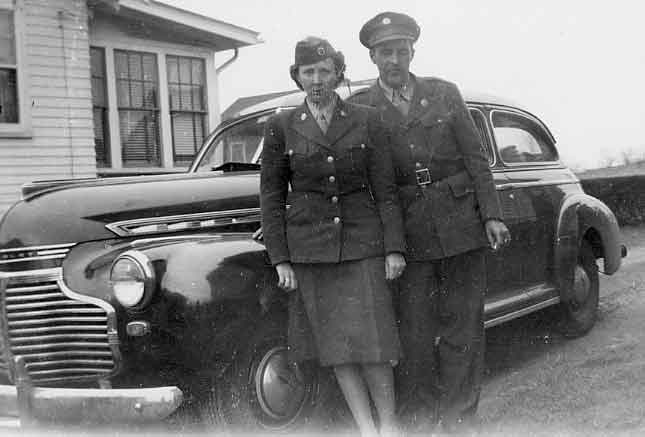 The songs I'll Walk Alone, I Don't Want to Walk Without You and the poignant Soldier's Last Letter were hits on the juke box. In our juvenile romanticizing of Rusty, we hoped she was listening carefully to the lyrics of these songs. Much to our disappointment she left one day--hopefully to meet her soldier husband.

I remember on ongoing poker game in the back of the pool hall. On one occasion there were gambling tables on the sidewalks. The streets and sidewalks were filled with GI's looking for any diversion that would take their minds off what they might be facing when they were sent overseas. Some soldiers from Camp Roberts (a most unpopular place) became so distraught with the heat and lonliness, they hanged themselves from Salinas River bridges. Morro Bay was a very busy little town. There was a USO, but most of the entertainment seemed to be the saloons. Eventually the pool hall burned and they moved to a new location. (See Individual Photographic Collections--Glen Bickford photos four and five.) The building was rebuilt with the new Circle Inn (now named Legends) on the corner. I'm Walking The Floor Over You, by Ernest Tubb, could be heard emanating from this place a block away. A local metaphor for the Circle was "circle in and stagger out." The Shamrock saloon was located a block south. (NW corner of Morro Bay Boulevard and Main Street) On some occasions Doug Reviea would play his fiddle in this place. (or maybe it was our local carpenter Roy Bird) The Shamrock was eventually demolished and replaced by the Bank of America. It is now a real estate office. Wild blackberry vines were prolific in Morro Bay and one of the largest was located behind this building.